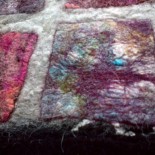 Whilst the rest of the country has been battling with the elements I have been watching golden leaves gently swirling in the morning sunshine.

Two months ago I started rolling felt for cushions. And the truth is I still am.

Now why would you decided to hand roll enough felt to make two cushions?

Well, something about the delight of having a longer project on the go and I do have time to do it.

In the end this was not such a simple project after all. I believe it took me about fourteen separate mornings to hand roll enough felt to make two cushions. But, frankly I lost count.

It took so much time because I only made pieces about nine to twelve inches square at one time and I insisted on trimming off quite a bit of edge to give me the best felt pieces possible. But the fact is that with seam allowance and trimmed edges, and if you make felt for both sides, a patchwork cushion takes up more fabric than you might think.

With so much repetition I developed a set laying-out technique which helped me achieve a fairly consistent result in terms of thickness and felt quality.

But it would be simpler to use industrial felt wouldn’t it?

Not half so beautiful.

This first cushion in naturals is made from five shades of alpaca, a top up of merino and cream Devon long wool tops with additions          of soya and white silk hanky marbling. 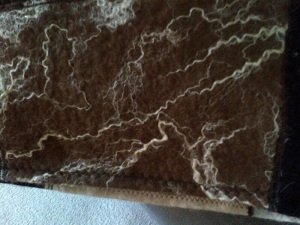 I used a set of templates cut from plastic grid sheets (bought from the local craft shop) to help me work out dimensions, seam allowances and get true right angles. Even so my right angles weren’t perfect.

I considered different seam options. I didn’t want raised seams because the cream Devon long wool felt is very loose textured and would have a fuzzy edge.

So in the end I did a flat seam overlapping the fabric edge, sewed using straight stitching and overcast the top raw edge with parallel lines of zigzag stitch. The stitching was rather imperfect but still looks ok.

I learnt that merino is really a much better fibre than alpaca for this type of project. It is hard to get a firm enough felt with alpaca to stop cushions shedding fibre. Adding silk marbling is an excellent way of making a fabric with more substance and sheen which does not shed. The silk helps to hold the fibre in situ.

And now the felt for the second cushion is piled and ready to sew. 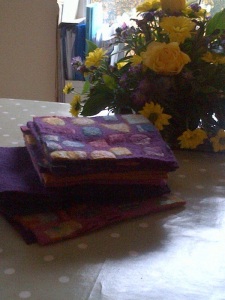